This is one of my favourite recipes ever.  It comes from my grandmother Maria and is a sort of 'escabache' but without the sharpness of it. The fatiness of the blue fish goes really well with the acidity of the vinegar. It is best prepared with whole rather than filleted mackerel. The downside to that is that mackerel has many bones (and some of them very thin) so you would have to ask the children to be really careful eating it (and be very careful yourself!)

Talking of fish bones, I am being told a female journalist was outraged during the summer because I had said that one of the main differences in eating habits between the UK and Spain is that in Spain we are used to eating fish with bones while in the UK most of the fish is filleted. Though she chose to take  it as an insult, I am afraid this is a matter of fact, not a matter of opinion. Her main counter-argument apparently was that British people have been eating fish with bones for many years…now, wait for this…  in the River Cafe!! Oh yes. And then they say it is politicians who are out of touch…

You need:
- a mackerel per person (ask the fishmonger to cut the head off and gut it)
- 100 gr flour ( for five mackerels)
- 5 tablespoons of olive oil
- two bay leaves
- 7 cloves of garlic (sliced)
- 2 teaspoons of chopped parsley
- a third of a glass of red vinegar
- a glass of water
- salt

In the same oil where you have fried the mackerel add the garlic and fry it over medium heat for a couple of minutes until golden, then add the bay leaves, a teaspoon on parsley and the vinegar, wait for a minute while the vinegar gets hot and bubbly and then add the water. Wait for another minute and pour all this over the mackerels. Let them simmer for 3 minutes.

You can either eat them at this point or leave the in the fridge until the following day ( this dish actually improves over night). Sprinkle the other teaspoon of parsley on top just before you are going to serve it. 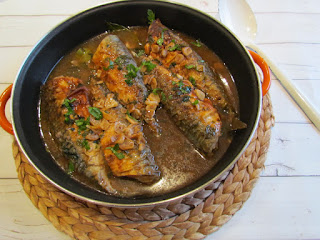