This recipe comes from the BBC food website, which apparently is a 'waste of resources' that makes the BBC 'imperialistic', according to some. One would have thought that cooking is a basic skill that deserves some public resources. In any case, bit cheap to criticise the BBC for this. Most countries would simply die for having anything equivalent to it. The most powerful diplomatic tool that this country has - by far (and I say that having spent many years working on foreign relations, including at the FCO itself)  Lack of vision does not even begin to cover how stupid it is to seek to damage it.

Now this is the recipe (which we have changed a little). You need:

Blend all the ingredients together. Before serving it drizzle a bit of olive oil on top. As simple as that. 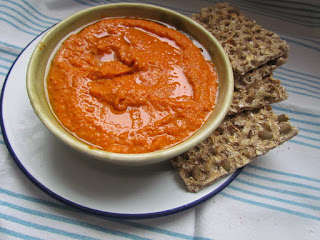 We prepared this for the retirement party of a neighbourhood friend as it is really easy buffet summer food.

- a watermelon (if you are in the UK use a whole watermelon, but if you are in Spain, Italy or France use only half - British watermelons are half the size of Mediterranean ones, which is a bit bizarre as most of them are imported from the Mediterranean)
- one and a half packets of feta cheese
- three red onions
- 200 g of black olives
-  big bunch of parsley
- 5 tablespoons of oil
- three and a half table spoons of vinegar
- salt

Cut the watermelon in bite size cubes. Cut the onions in half moons and put them on top of the watermelon. Crumble the feta cheese and add it to the salad. Finally sprinkle the parsley on top. Separately mix the oil, vinegar and salt and pour it over the salad. Toss it all together.

We were running really late for the party so I am afraid we took the picture of the salad in its foil container, which is convenient for the party but a bit ugly for the blog - on the bright side though it means you will not have to do any washing up. 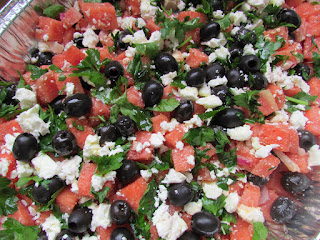