This is lovely for a hot summer day.  Very easy to make, though cooking octopus requires a physical and emotional battle with the 'pulpo' (see below)

You need:
- a medium octopus/pulpo (should be enough for 4/5 people)
- a handful of parsley
- 4 tablespoons of really good olive oil
- a clove of garlic
- the juice of half a lemon
- salt

Start by boiling the octopus in a big pan with lots of salty water. If you do this recipe with a fresh octopus then you will have to hit it (literally) many times with a rolling pin or equivalent so that it becomes tender. If you shy away from displays of physical violence in your family, then do as I do: freeze the octopus first and then defreeze it overnight (for some weird reason this makes the octopus 'decontract' and become tender). If you do not do this the pulpo will be rock hard.

In any case, when you put the octopus in the water take it in and out of the water three times in quick succession. This is so that the pulpo 'gets scared' (I kid you not) and therefore gets 'tense' again. I do not know whether the physics of this are right, but Galician cooks (as far as I am concerned the best cooks of pulpo in the world) swear by this method, and therefore so do I.

Once the pulpo is boiled ( which you can do well in advance) cut it into chunks, pour two tablespoons of oil over it and toss well with your hands so that all chunks are well coated.
Heat a cast iron pan until it is very hot. Put the pulpo chunks on it and cook them for a couple of minutes on each side until they get a bit charred.

Meanwhile blend the remaining oil with the garlic and parsley. Pour this mixture over the grilled octopus, sprinkle the juice of half a lemon on top of it and that is all. You can eat this with boiled potatoes, rice, salad, crusty bread... or on its own! 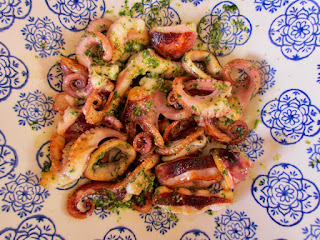