I was in Serbia this week to start the Inspiring Girls campaign there.  Seriously impressive (and strong!) women and girls. Great discussion with MPs, leading civil society groups, top business women, actresses, former ministers, diplomats… You can see some pictures in the campaign’s website www.inspiring-girls.com

By the way, apparently Boris Johnson was in Serbia that day too (though not at the Inspiring Girls event!) despite it was the day after Trump was elected, when the new US President was failing to call the UK Prime Minister first and with Brexit falling down the list of EU priorities by the minute. An outstanding display of wisdom on foreign policy priorities...

This is a traditional Serbian recipe. You need:
- 3 red peppers
- an aubergine
- 1 large onion
- a clove of garlic(grated)
- 2 tablespoons of olive oil
- salt
- half a chilli pepper
- a tablespoon of red vinegar
- a pinch of paprika

Preheat the oven at 200 degrees. Put the peppers and aubergine on a roasting tray and roast them for 30-40 minutes, until they are charred. Take them off the oven and when they are cold, peel the peppers and take out the pulp of the aubergine. Put it all in a food processor with the chilli pepper and pulse it a few times.

In a pan heat the olive oil. Add the vegetables mixture,  the garlic, paprika, vinegar and salt and let it all simmer under very low heat for 20 minutes (stir it every now and then)

We ate it with bread but you can have it as  a sauce with meat or with chicken too. The children approved. 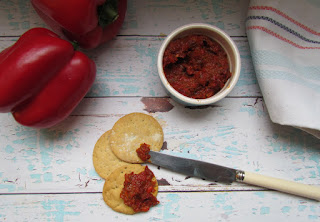