SCALLOPS WITH CAULIFLOWER AND CHORIZO

In the US it is easy to make this dish because most supermarkets sell frozen scallops (which at least in California are rather good quality). If you manage to get proper fresh scallops just grill them with butter and serve them with lemon and bread. But if you get the frozen scallops, this is a good option. You need:

- half a glass of cream

- a little bit of parsley

Boil the potatoes until they are tender. While they are boiling, roast the cauliflower, tossing it with olive oil and salt and then putting it in the oven at 220C degrees for 25 minutes or until it is golden (I make roast cauliflower at least once a week, so I normally use the leftovers). Put the potatoes, cauliflower, cream and a tiny pinch of salt in a blender and blitz it all to a fine but thick pure).

In a frying pan heat the chorizo cubes (without oil) until they release the fat (3-ish minutes under low heat). Put them aside. Add a little bit of oil to the pan, add salt to the scallops and fry them (two minutes on one side and one minute on the other side). Don't overcrowd the pan or the scallops will boil (not nice!) 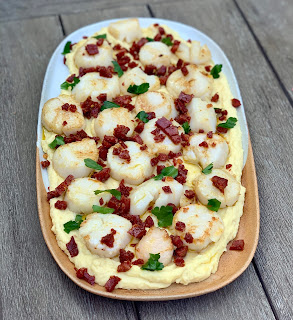