I was asked to come up with a Spanish version of Welsh Cakes after I attended a London Welsh Rugby lunch last Saturday to raise funds for Inspiring Girls. You can see the welsh cakes that were served there on my instagram. And the BBC report on Inspiring Girls sponsoring the London Welsh Women's Rugby team with Lotus here (via twitter): https://mobile.twitter.com/londonwelshwrfc/status/971824330718969859.

I don't want to upset the Brexit ultras ( oh well...) but it turns out Sheffield University researchers are looking into an influx of Spanish migrants into the Welsh copper mines 4,000 years ago, which means that perhaps Wales and Spain are not so far apart as one might initially have thought...and perhaps there is a bit of Spain as it happens in welsh cakes...fancy that.

Anyway, going back to the recipe, this one is a Delia recipe adapted to Mediterranean flavours as it has orange zest and orange blossom water. I do not want to disrespect the original recipe, but this is very very good...

Sift the flour and mixed spice. Add the sugar. Then add the butter cut into little squares. Rub the flour and sugar with the butter with your finger tips until you get the consistency of bread crumbs. Add the zest of the orange, the sultanas and the egg and blossom water and mix it all well with your hands (try not to touch it too much). Extend the dough over a floured surface with a rolling pin and cut rounds with a cutter. Fry them on a pan (no need for butter or oil) until they are golden (3 minutes on each side). You can sprinkle some sugar on top while they are still hot, but they are really good without sugar too. They lasted literally 4 minutes in my kitchen before my three monsters ate them all... 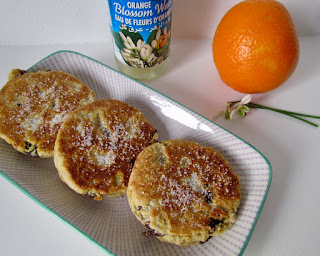