Apparently bananas have a soothing effect, which is exactly what I need after we discovered yesterday that our system had been hacked. Just in the blog we got more than 2,600 hits from a single country (yes, that country). No point involving the police, since last time this happened (and despite my husband being in government at the time) they were so utterly hopeless that it was actually rather funny. Talking of funny, I am half-discussing with a couple of people about putting together some recipes with  funny anecdotes (not just about the police!!) that took place during the last five years. Not sure I will find the time to do this...but will definitely keep you posted.

Preheat the over at 175 degrees.
Mash the bananas (reserve three slices for decoration). Sprinkle the juice of the lemon on the bananas. Mix with the yogurt/fromage frais. Put it on a small baking dish or ramekin. Drizzle the honey on top. Bake for 20 minutes (we put it at the end for 1 minute under the grill to get a nice brown colour).

Unlike me, my children love both bananas and honey, so they like this for breakfast. It is really easy for them to do the whole recipe on their own provided you help with the oven.

PS - have you joined the Inspiring Women campaign? We have 16,500 women registered already (and if you are a man, you can join Inspiring the Future, which is the wider campaign) 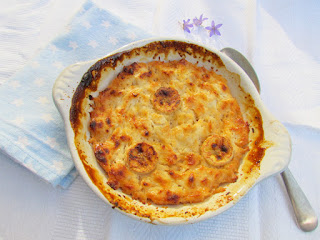 This is a seriously easy cake.

Preheat the oven at 175 degrees.

Mix the flour, salt and sugar. Then separately mix the melted butter, beaten eggs and milk. Combine both sets of ingredients (just do this with a wooden spoon) Then add the marmalade. Put it all into a loaf tin (just lined, no need to grease it). Sprinkle the pearl sugar or demerara sugar on top and bake it for one hour (put a bit of foil on top of the cake after half an hour so that  the sugar does not get burnt).

According to my children this tastes particularly good with chocolate ice-cream. 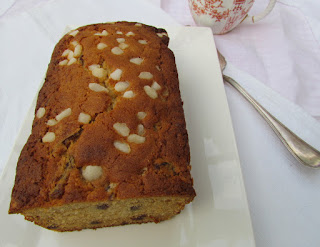