Long time since I last posted here, but setting up in a new country has taken a while.

These are called 'torrijas', an Easter dessert that is eaten all over Spain, and they are divine. Nobody in my family (by which I mean no women, because men did not cook - surprise!) made them when I was little, but once every year la señora Paca in my village would make big trays of these and give us one. They are perfect for  Easter, because they feel properly sinful after all that Lent restraint.  Think of them like the much better version of French toast: made with delicately flavoured milk, fluffy not mushy, and with a hint of honey at the very end.

You need:
Stale bread (proper crusty bread) cut in thick slices - it really has to be stale, so buy it, cut it and leave it in a cupboard for a couple of days.
250 ml milk
150 ml sugar
peel of a lemon
a cinnamon stick
a teaspoon of vanilla essence
two eggs, beaten
two tablespoon of honey
Unflavoured oil (sunflower or alike) - a very generous amount
150 ml water

Start by preparing the flavoured milk the night before you are going to make these: just bring to the boil the milk, cinnamon stick, lemon peel, 50 g of sugar and vanilla; put it in a sealed container and let it cool down (in the fridge) over night.

Heat the oil in a frying pan (over medium heat). Soak the bread properly into the flavoured milk (the bread should absorb as much milk as possible), then coat the bread with the beaten egg and fry until they are golden on both sides. Don't bother putting them on kitchen paper when you take them out of the pan to get rid of excess oil: you only eat these once a year, so 'excess' is the whole point of them.

You can prepare the honey syrup  by just combining the water, 100 ml sugar and honey and boiling it  for 15 minutes over low heat. The nicer way to do this (and indeed most other syrups) is to prepare a caramel with the sugar, honey and a teaspoon of water (just put it over low heat and wait without stirring until it becomes golden), then add carefully the rest of the water and boil for 8-10 minutes. You can also add a teaspoon of whisky or cognac to the water and caramel (before you boil it), which obviously makes the syrup even better. Let the syrup cool down a little and pour over the torrijas.

These are eaten at room temperature. 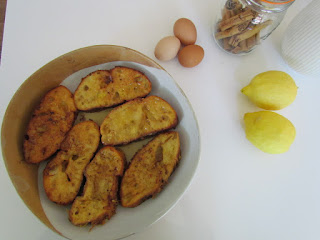