In Spain celebrate Christmas Eve with a big dinner. Due to the Hollywood influence, turkey has become the food of choice though luckily (this was a really clever move) we did not import the tradition of eating brussels-sprouts.  I have cooked this turkey recipe for as long as I can remember.

- a turkey, as big as possible, as the whole point of Christmas is to have as many people as you can fit  around the table.

- if you want to give the turkey a bath you need : a big (bigger than the turkey) bucket  full of water, two bay leaves, two mandarines, an onion, two oranges, one lemon, a big handful of parsley, a glass of port, a teaspoon of nutmeg, two cinnamon sticks a handful of coarse salt and a handful of sugar.

I normally give the turkey a 'bath' the night before the day I  cook it. To be perfectly honest, I am not sure it makes any difference to the taste, but it sort of gets everybody into the Christmas mood and the children, especially the little ones, love to throw the ingredients into the bucket. If you want to do this just get the turkey into the bucket, cover it with water and pour all the ingredients  (cut the onion, orange and lemon in quarters and squeeze them a bit as you are getting them into the bucket) into it. Leave the bucket (covered with a lid) in a cold place. One of my little nieces is absolutely convinced she has seen the turkey swim and actually move its legs in this bath - there you have the magic of Christmas!

The following day take the turkey our of the bath and pat dry it. Put it on a roasting tray (if you want a really moist turley then roast it in a clay roasting tray, as clay retains the water much better than metal trays). Salt the turley inside the cavities. Mix the dried fruit, apples, onions and pine nuts and stuff the turkey with them ( both the front and rear cavities). Put your hands between the breasts and the skin so that the skin becomes loose and massage the breasts (I know, just do not think about it!) with 80 gr of butter. Finally put the three bay leaves between each breast and the skin. Salt the turkey all around and cover with the rest of the butter. Put two glasses of water in the bottom of the tray together with the port. If you have any remaining stuffing add it to the roasting tray.

I do 50 minutes per kilo at 200 degrees and cover the turkey with foil after 50 minutes and then I uncover it for the last 20 minutes. I also let it rest for 20-30 minutes covered with foil before eating it. Eat it with roast potatoes and carrots or any other vegetable you like (as you may have gathered I detest brussels sprouts). It is a massive success year after year. 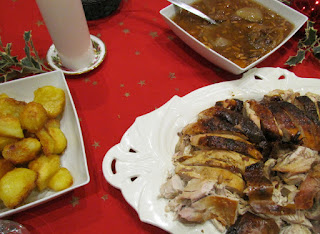 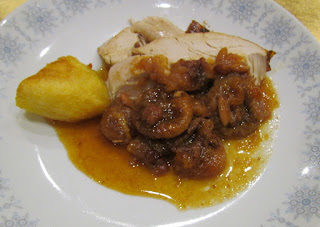 Email ThisBlogThis!Share to TwitterShare to FacebookShare to Pinterest
Labels: meat

A must for Christmas.

Boil the cranberries, wine and water and let them simmer for 45 minutes. Put the mixture over a muslin cloth and let it drip during the whole night (do not squeeze the muslin cloth). The following morning measure 155 gr of granulated sugar for each 300 ml of the red juice. if you get more or less juice then let your kids calculate the right proportion. Put the juice and sugar in a pan over medium heat and let it boil for 20 minutes (or if you have a food thermometer, until it reaches jam temperature) Pour into sterilised jars. 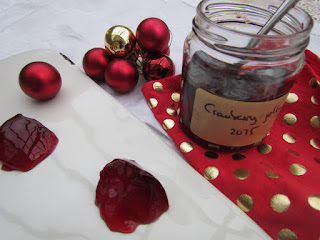