In order to celebrate that we have reached 200,000 views I am bringing to you one of the most loved foods in Spain and indeed one of my favourite ones (which my children like as well): barnacles, or 'percebes'. The mother of all delicacies in Spain. It really is big celebration's food. Hideously expensive (unless you happen to be in a Galician fishermen village when they are in season and then you can have the pleasure of stuffing yourself with these). They epitomase the essence of the Spanish cuisine: if you find a great ingredient do as little as possible  to it. Eating barnacles is like 'eating the sea'.

In order to prepare these you need to get as many barnacles as you can afford (normally when we eat these in Spain we just get a very few per person given their price). When you buy them, ask for where do they come from as the colder the water the barnacles come from, the better they are (and I honestly think that barnacles from Galicia are the very best).

Ideally they should be boiled in sea water, but if you are not living near the sea just fill a big pan with water and add 70 gr of sea salt for every litre of water. Add a bay leaf per litre as well.  Once the water is boiling add the barnacles. As soon as the water boils again (a matter of a couple of minutes, if at all) take them off the pan (in some Galician villages the recipe calls for putting the barnacles into the pan , praying an 'our father' and taking them off the water…though this obviously depends on how fast you pray!). Cover the barnacles with a clean tea-cloth and serve them while they are hot. Simply superb. 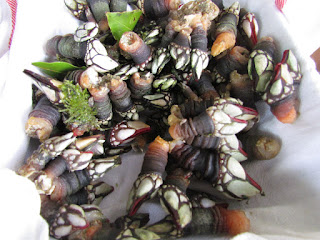 We had some left over pastry from the tart Lorraine in our previous post, so we made some pesto snails. this could not be easiest. You need:

- a rectangle of puff pastry around 10 cm width and 20 cm length.
- 4 tablespoons of pesto (preferably home made - see our recipe http://www.mumandsons.com/2011/03/green-pesto.html)
- two handfuls of parmesan cheese ( or any other grated cheese)

Preheat the oven at 200 degrees. Spread the pesto over the rectangle of pastry and then sprinkle the cheese on top. Roll the pastry along its longest side and then cut slices of around 2 centimetres long. Put the slices on an oven tray lined with baking paper. Press them down a bit so that they get flat. No need to paint them with beaten egg or anything like that. Bake them in the oven for around 20-25 minutes or until golden. Eat them while they are still warm. 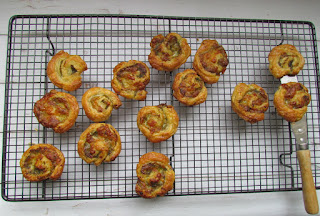