My father in law is half Russian. I first tried pashka (an Easter Russian dessert) at a family celebration years ago and since then I bought a pashka mould to prepare it for him, but you can do this in a clean flower pot (with a hole at the base) or even with a colander.

You need:
500 gr cottage cheese (blend it so that it becomes smooth) or ricotta
150 gr creme cheese (full fat, I am afraid…)
200 gr soured cream
2 egg yokes
a pinch of salt
100 gr sugar
grated ring of an orange
1 teaspoon vanilla essence
two tablespoons of raisins
two tables spoons of sultanas
a handful of candied peel
a handful of sliced almonds

Mix the cottage and creme cheese with the soured cream, egg yokes and sugar. Beat well. Soak the sultanas and raisins in a bit of hot water for 15 minutes, drain them and then add them to the mixture. Then add all the remaining ingredients and mix it all well. Line the mould you are using with cheesecloth or muslim. Put the mixture into the mould, cover it with the muslin and put the mould on a dish to catch the excess moisture. Put  some weights on top of the pasta mould so that it drains well and leave it in the fridge for 24 hours. It should unmould easily.

We decorated it with candied cherries but you can decorate it with raisins or almonds. Also, the Russian pashka recipe is a bit like the Tortilla de Patata recipe in Spain - they all claim that theirs is best. So feel free to experiment a little by adding dried blueberries, cranberries or even candied ginger.

It is very filling  so you only need a little slice per person. It is traditional to eat it with yeasted Russian bread (Kulich) but it is also very nice with strawberries or berries. 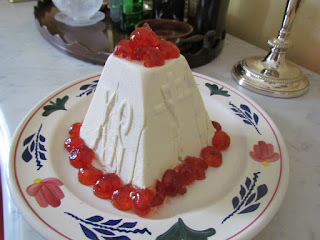