This is a traditional way to eat scallops in the north-west of Spain. You need:

- 6 scallops or vieiras, as they are called in Spain .cleaned and with one-side shells- it is always worthwhile leaving them for an hour or so inside a bowl with cold water and a handful of salt as this eliminates any 'sand' within the scallops) If they are small you may want to use two 'vieiras' for each shell.
- 1 onion (diced thinly)
- 120 gr Spanish ham (iberico, serrano or at a push Parma ham) - also diced thinly.
- 100 ml white wine
- juice of a quarter of a lemon
- three tablespoons of fine breadcrumbs
- two table spoons of olive oil and then a drizzle for the final touch
- chopped parsley (1-1.5 teaspoons)
- salt

Preheat the oven at 200 degrees.
Heat the two tablespoons of oil and fry the onion (low heat) until it is soft (around 12 minutes). Then add the diced ham, wait for  3 minutes, increase the heat and add the white wine and lemon. Leave it on for 3-4- minutes until the wine evaporates. There is no need to salt this mixture as it has ham, but add a little bit of salt to the scallops.

Divide the mixture between the six shells of the scallops. Put a scallop on top of each filled shell. Mix the breadcrumbs with the chopped parsley (and a tiny bit more salt) and sprinkle a tablespoon of breadcrumbs on top of each scallop. Drizzle the breadcrumbs with a tiny bit of olive oil. Put the scallops on a tray and put the tray into  over for 15 minutes plus a couple of minutes under the grill so that they come out a bit brown on the edges. Eat immediately. 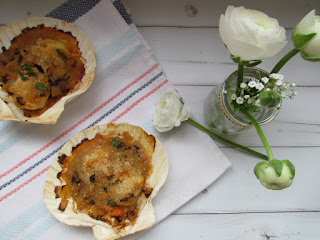