This is one of my favourite sandwiches from my 'most-est favourite' tapas bar in Spain: La Criolla (in Valladolid). They serve it with mini ciabatas as a tapa, but you can make it with normal size ones so that it becomes a lunch.

You need:
- a ciabatta roll (you can also do this with a baguette)
-1.5 piquillo peppers (open them up so that you cover the whole of the roll with the peppers)
- tuna (half a small tin) - the original recipe is with ventresca, i.e. the belly bit of the tuna which is very moist, but good quality tinned tuna works well.
- two green olives
- 2 prawns
- an anchovy fillet
- a teaspoon of mayonnaise
- a drizzle of olive oil
- tiny bit of salt

Open the ciabatta roll. Drizzle each side with a tiny bit of olive oil. Put (in this order) the piquillo peppers on top of the bread, then the flaked tuna, followed by the prawns (cut them in half horizontally so that you end up with 4 thin prawns) a bit of salt, the olives (cut in half) the anchovy fillet and finally the mayonnaise. Put the other half breadroll on top. Put it in a sandwich bag and into the toaster, or under the grill for a few minutes so that the bread gets warm. Eat immediately. 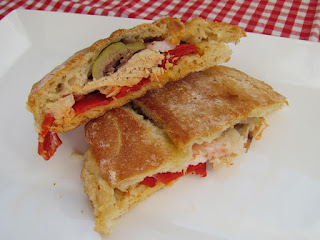