I hope I am not being immodest if I tell you that this dessert - put together by yours truly- is divine. The combination of flavours comes from a dessert called Montblanc that they serve at Angelina's, a tea-room near the Louvre where elegant Parisian ladies used  to go for 'chocolat chaud' in the afternoons before the place was taken over by tourists.  But while Angelina's version is seriously rich, this is light as a feather. It is also really simple to make. I served this both in Spain and then in the UK for celebration dinners this year and it was 'wows'  and compliments all around.

- a packet of 'brik' pastry (some supermarkets have stopped stocking brik pastry, but you can still find it in some, and also in Amazon)
- chestnut puree (I prefer the unsweetened version)
- a couple of small meringues (either use our recipe, of just buy them in the shop)
- whipping cream
-icing sugar
- sunflower oil
- dark chocolate

Start by frying the pastry in sunflower oil (15 seconds on each side until it gets golden) . Brik pastry is normally sold in rounds. I cut the pastry into small rounds to do individual desserts, but you can also do a big dessert, which looks very spectacular, by just frying the brik rounds just as they come out of the packet. Put the fried pastry on kitchen paper so that you get rid of all the oil. I normally fry this in the morning if I am going to use it for dinner so that there is not oily moist at all.

Just before you are going to serve the dessert, put a round of pastry on each plate. Put three dots of chestnut puree and three dots of creme on top. Sprinkle the puree and cream with the meringue and then with the dark chocolate. Put another brik round on top and repeat what you have just done: chestnut puree and whipped cream dots followed by meringue and chocolate. Cover with another round and dust some icing sugar on top. Serve immediately.

If you have the puree and creme in pipping bags you can do this very quickly (I served it last for 11 people and it did not take more than 5 minutes to assemble the dessert). And if you do it with a big round for the family version of this dessert you can get this done in no time at all. 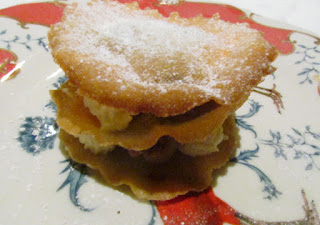 And this is the (bigger) family version: 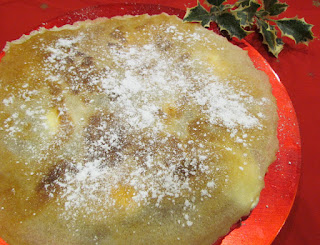