I am trying to encourage the kids to stop watching random youtube (though I have little credibility on this as I could not stop watching the 'what are those?!' vines a few months ago). In my search for  science experiment sites, I have become hooked onto the Crazy Russian Hacker and The King of Random. Absolutely addictive stuff: experiments with  liquid nitrogen, melting cans and making green slime, and also plenty of plainly weird but compelling-watching videos about domestic tricks, from how to cut a watermelon to opening packs of crisps. Who would have thought I would end up discussing with a teenager whether it is better making candles with butter or with mandarine peels. Live to believe…

King of Random has this recipe for Lego candy that in a moment of weakness I agreed to try on.
You need:
- 250 ml water
- 125 ml corn syrup
- two packets of unflavoured powdered gelatine (or 10 leaves that you should pre-soak )
- a packet of Jell-o (they sell it in many supermarkets and in Amazon)
You also need lego silicon moulds that you can also buy in Amazon.

Mix the water, corn syrup, gelatine and Jell-o. Heat the mixture in a pan over medium heat for 8 minutes. Put in into a tall heat-proof container. Let it rest for 3 minutes. with a spoon, take the top crust that would form on the top and discard it. Pour the remaining clear liquid into the moulds and let them rest for 5 hours. You should be able to de-mould them easily by then. 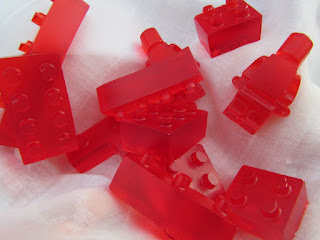