This is rather laborious (only worth doing it to show off at Christmas really) but the result is just spectacular. I used to do this with filo pastry and it made an easy (yet impressive) dessert, but making the pastry by hand takes this dessert  to a totally different (and scrumptious) level.

You need:
For the pastry:
- 300 gr plain flour
- 100 ml water
- one and a half table spoons of sunflower oil
- one pinch of salt
- two eggs
For the filling:
- 7 apples cut into small slices
- a handful of raising soaked in brandy
- three handfuls of breadcrumbs
- two handfuls of sliced almonds
- a teaspoon of cinnamon
- 100 gr butter
- juice of one lemon
- 90 gr sugar

Mix well the flour, sun flour oil, salt, water and egg. You need to knead it for a really long time: knead it four or five times and then hit the pastry against the table (with strength!) Repeat this process at least 100 times (yes, really...it seems acwkard at the beginning but it is rather cathartic. The children thought it was fun for the first ten-ish times and then -predictably- got bored). Put it into a bowl, cover it with cling film and let it rest for 30 minutes.

Meanwhile prepare the filling: melt the butter and fry the breadcrumbs into the melted butter until they become golden. Cut the apples into small slices and toss them with the lemon jounce so that they do not become dark. Mix the apples, cinnamon, sugar, slices almond, raisins and half of the breadcrumbs.

Now comes the only difficult bit: you need to stretch the pastry until it becomes transparent. For this you need to cover a table with a tablecloth (preferably a printed or coloured one). Sprinkle flour on top of the tablecloth and then start stretching the pastry first with the rolling pin and then with the back of your hands and your fingers until you can see the printing or colour of the tablecloth through it. The thinner the pastry the more delicate the apflestrudle.

Sprinkle the remaining breadcrumbs on the pastry and then add put the apples mixture over one half of the pastry. Fold the two shorter sides as if it is an envelope. Then roll the mixture and pastry as if it is a swiss roll.

Put the roll on a tray lined with baking paper (making a u-shape if it is too big for the over tray). Paint the pastry with the remaining egg (beaten) and bake for 35-40 minutes until it becomes golden.

After it is baked just sprinkle it with glass sugar and eat while it is warm (on its own or with cream or vanilla ice-cream). 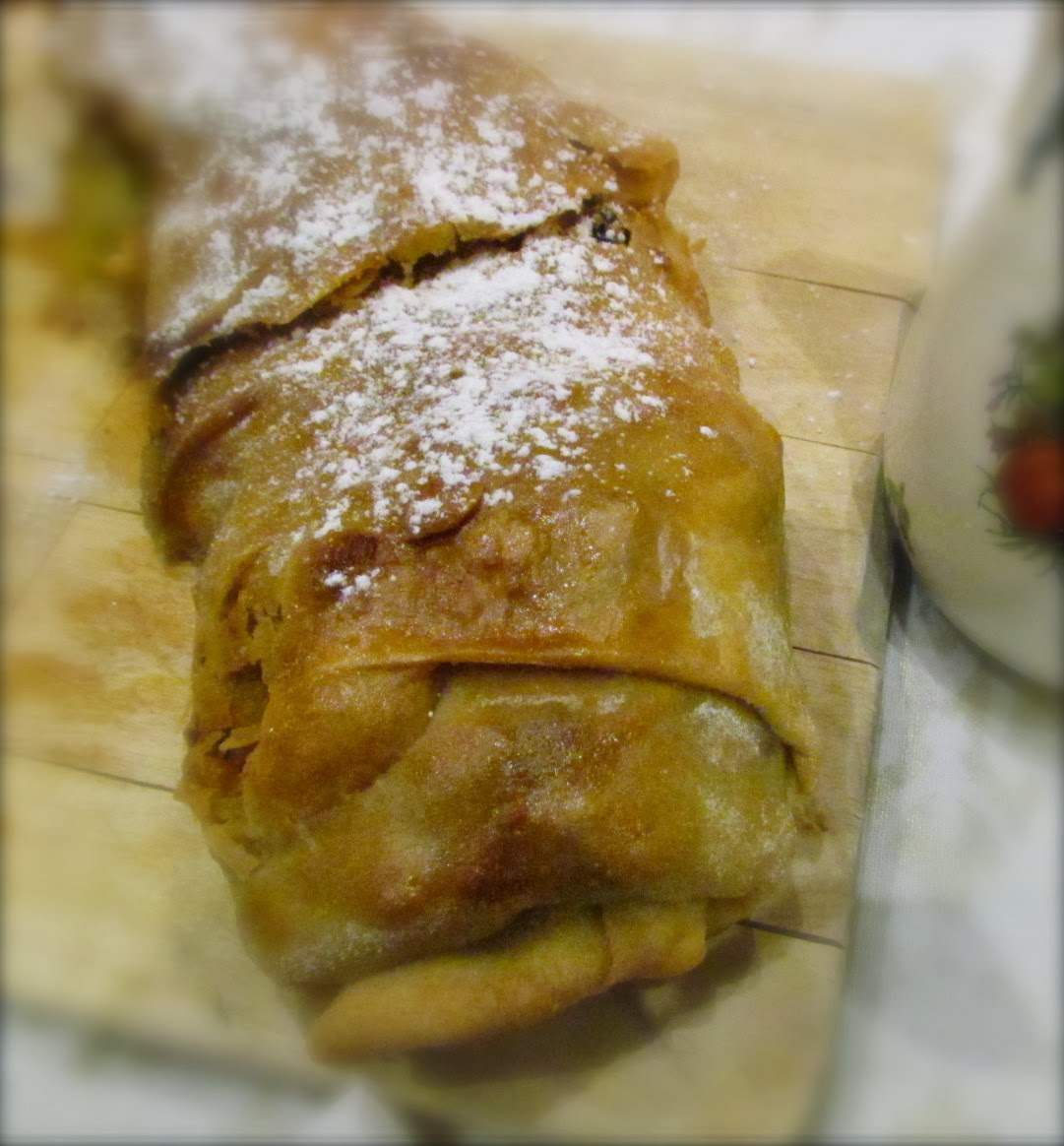