This is our second try with mushrooms - still unsuccessful. The children helped to prepare the dish but refused to eat it. They eventually tried some of the stuffing, but even that was not praised.

Salt the mushrooms on both sides. Fry them for three minutes on each side in a non stick pan with a couple of table spoons of olive oil. Put them on a roasting tin. Separately, mix the breadcrumbs, olive oil, garlic andparsley ( the mixture shoudl be wet, so keep adding olive oil until you have the consistency of mud). Put a bit of teh mixture on top of each mushroom and grill it under the hotest temperature of your grill for three to four minutes. You can also add some cheese on top if you wish (either the melting sort of just parmesan) 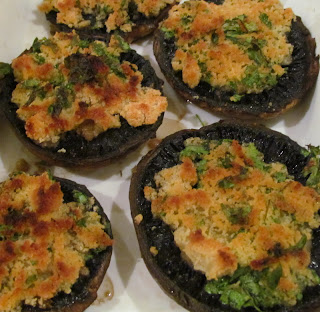