This is a very typical soup from the south of Spain. It is a bit like a thick gazpacho, except that the gazpacho is done with cucumbers while in the salmorejo there is nothing but tomatoes. My children eat this as a cold soup in the summer but they also like it on top of crusty bread, preferably with a bit of ham on top.
You need:
- 1 kg tomatoes (as red and ripe as possible)
- 200 gr stale bread
- 200 ml olive oil
- 2 cloves of garlic
- salt
- red wine vinegar

Cut the tomatoes in quarters. Put them in a bowl with the bread, the olive oil and the peeled cloves of garlic. Mix it all well with your hands squeezing a bit the tomatoes. Cover the bowl with cling film and let it marinate for at least 3 hours. Then get rid of the cloves of garlic and blend all the other ingredients in a blender. Add salt and vinegar to taste. Serve with little bits of cured ham or with chopped boiled egg or just on its own.

The kids like helping with all of this and particularly enjoy squeezing the tomatoes and the bread. It is indeed a very satisfactory feeling. 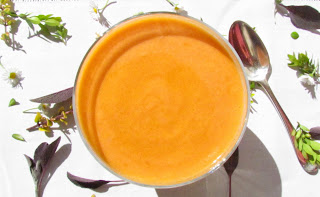