Made this for Easter, partly because I have a surplus of lemons (a problem I never thought I would have!) and partly because they resemble eggs. They could not be easier to make:

For the mini pavlovas you need

four egg whites
250 gr sugar
a pinch of salt
one tsp of cornflour
250 ml double cream
Whisk the egg whites with the salt for a few minutes (with an electric mixer or by hand) until they form hard peaks. Add the sugar - one spoonful at a time while you keep whisking. Sprinkle the cornflour on top and fold them carefully over the egg whites. Put dollops of this on a piece of baking paper. Bake them on a preheated over at 180 degrees. As soon as you put the egg whites in the oven turn it down to 150 degrees and leave them for 35 minutes. Then just open the door of the oven and let it cool down completely.

To assemble them: whip the cream until you get soft peaks. Put a spoonful of cream on top of each merengue and top it up with a teaspoonful of lemon curd. 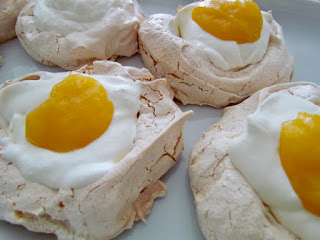