This is a very easy ice cream for Christmas time, though you can eat it throughout the whole year. Turron is an almond and honey nougat that we eat in Spain during Christmas. 'In the beginning' there was only turron duro (hard as a stone) and turron bland (sweet as honey). Then came the 'egg yolk' turron (which I detest) and the chocolate one (which I love-love-love) And then many other fancy ones (mostly terrible) that you can now find in most spanish shops.

For this recipe you need:
- one 'tableta' of turron blando (300 gr)
- 400 ml cream -  preferably double cream. I sometimes use single cream, which is frankly stupid, as the turron has so many calories (don't even look at the label or you will have a shock!)  that saving a few calories on the cream is just pointless. And yet I still do this…madness I know. )
- a tablespoon of honey
- two egg yokes.

Cut the turron into little pieces. Heat the cream with the turron over very low heat until it dissolves (do not let it boil). Separately whisk the egg yokes and the honey until you get a pale fluffy mixture. Then add the turron and cream mixture to it, little by little, while you are still whisking so that you get a thick cream consistency. Freeze it in an ice-maker machine or just in a container in the freezer (stirring it a couple of times so that you do not get any crystals in the ice cream) Take it out of the freezer 15 minutes before you are going to serve it. 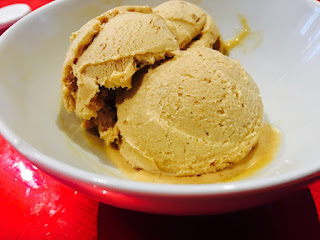