This is a very typical catalan dessert. In Catalan it is called 'crema', while in Castillian it is called 'crema catalana'. Though Calaluna can legitimately claim ownership of this recipe (as indeed there are references to it in Catalan literary works even from the Middle Ages) the fact is that it is eaten all over Spain. And indeed in Europe, as it is just a variation of the typically French 'creme brûlée' that the Belgians make to absolute perfection. Here in the UK this is a 'burnt cream' or a 'Cambridge burnt cream'. Some also claim it is a 'Trinity cream', as they say it was invented in Trinity College in Cambridge in the XXVII century.  Despite the disputes about the origin of this recipe, the fact is that it is a delicious dessert. And it is rather uplifting that no matter the country, language or region, at the end of the day we all eat the same.

Heat the milk with the lemon and orange peels and the cinnamon. Let it come to almost boiling point, then lower the heat, simmer for 8 minutes and then cover it and let it cool down for another 20 minutes.

Separately mix the eggs and sugar (with the back of a spoon, so that you do not create any air bubbles). Add the corn flower, and then the milk (through a colander so that you do not get any cinnamon bits in). Put this mixture back in the pan over medium heat while you stir it until it gets thick (it takes around 8 minutes) I normally get this though a colander again to make it very smooth, but I suppose you are fine to do without this step if you cannot be bothered to do it.

Put the cream on the individual pots, cover with cling film ( really important as otherwise you will get a really unpleasant 'custard skin' on top) and let it cool down in the fridge for 3 hours. When you are going to serve it, put some sugar on top and then burn the sugar under a hot grill or (much -much easier) with a torch. 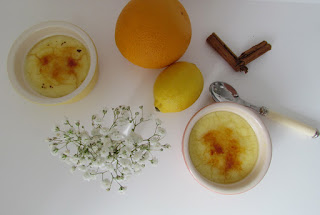