Though I was having a really happy weekend, I had to resort to a bashing recipe after receiving on Friday a leaflet from the Education Secretary Justine Greening in my home. Full of superficial trivia (bash) like pointless letters she has written on everything from airplane noise to pollution - as if that could be changed with just a couple of letters! (bash, bash) -  but no reference of course to her draconian cuts to the secondary schools budget which are already having a devastating effect on London schools (bash, bash, bash). Gone are the days when politicians had to be accountable for the financing decisions they took... (bash, bash, bash, bash)

Luckily this recipe involves plenty of biscuit bashing. It is from Simply Nigella and all I have done is to replace vanilla essence in the original recipe with orange essence. The pastry case is made with crushed bourbon biscuits which is one of those truly genius Nigella ideas (together with frying gnocchi's) and it  means you do not need any melted butter.

Bash the biscuits for as long as you need to get rid of any bad moods, worries or stress (if you are getting tired of bashing just think of the conservative education policy for a minute so that you can keep going) Mix them with half a teaspoons of salt and the butter. Take a flan case and cover it with the crushed biscuits so that you make a tart case. Let it cool down in the fringe for 2 hours.

When the case is ready, mix the cornflour with the milk until it dissolves in it. Then in a pan heat the cream, salt, chocolate, cocoa powder, coffee, olive oil, orange essence and sugar. Put it over medium heat and stir it (without letting it boil) until the chocolate dissolves into the cream. Take the cream off the heat. Pour the milk and corn flour mixture in it, bring it back to the heat and keep stirring until it thickens (around 10 minutes). Put it in a jug, cover with cling film (so that the cling film touches the chocolate cream) and let it cool down for 30 minutes in the fridge. When it is cold, pour the cream into the pastry case and let it all cool down for 4 hours or preferably overnight.

This tart is divine. Definitely good enough to even make you forget for a while about the policies of this government. Final bash! 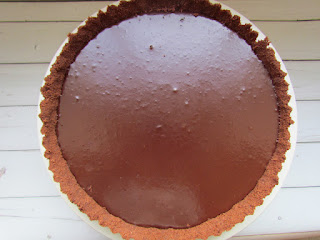