This is my favourite dessert of all times. So much so that we served it as a wedding cake when Nick and I got married. It is very filling, so all you need is a tiny square of it. But it is divine. Definitely a dessert for big celebrations. I made it for Christmas Eve (which is what we celebrate in Spain)
and it was a huge success.

If you happen to be in Segovia (which means you are lucky because together with Seville it is  - in my view- one of the two most beautiful towns in Spain) then buy one of these at the bakery El Alcazar by the Plaza Mayor. Or just ask for it as dessert after a meal of lamb or sucking pig (one of the two culinary specialities in Segovia) in El Parador or the restaurant Jose Luis. Just the thought of these places makes me happy.

For the whisky sirup:
150 ml sugar
150 ml water
60 ml whisky (if in Spain do it with whisky Dick, which comes from Segovia)

And more icing sugar for the top of the cake.


Start with the cake. Preheat the oven at 170 degrees. Mix the eggs and sugar and beat them well for around 10 minutes until they become very fluffy and double their size. Then mix the flour with the corn flour - sift them together and add them to the eggs and sugar mixture folding them carefully so that you do not loose any air. Divide the mixture between two swiss roll tins lined with baking paper and bake them for 15 minutes. When you take them off the oven let them cool down for 5 minutes and them flip them over a (clean) kitchen towel sprinkled with caster sugar.

While the cake is baking in the oven, prepare the syrup: just boil the water and sugar for 8 minutes and then add the whisky. Let it simmer for a further 5 minutes.

Now the cream: boil the sugar and water for 15 minutes first over high heat and as soon as it boils, over low heat. Put it aside and let it cool down for 15 minutes. Beat the egg yokes and add the boiled sugar with water to the egg yokes very slowly while you keep beating. Put it all in a pan over low heat for a further 5 minutes while you keep stirring constantly. Let it cool down completely (better in the fridge).

And finally the marzipan:  just mix well the almonds, egg white and sugar. Make a ball with the resulting paste, cover it with cling film and let it cool down in the fridge for an hour.

To assemble the cake put a cake lawyer over a serving tray. 'Paint it' with half of the whisky syrup. Spread half of the cream on it. Then add the second cake lawyer. Paint it again with the remaining syrup and spread the remaining cream on it. Put the marzipan between two cling film sheets and roll it until it is very thin (as thin as possible). Put the marzipan layer on top of the whole cake (the easiest way to do this is to flip the cling film with the marzipan on top over the cake with the help of somebody else). Cover the top of the marzipan generously with icing sugar. Take a spaghetti or a skewer and draw parallel lines to make a rhomb pattern on the icing sugar  (see the picture) Then get a blowing torch and caramelise the lines and also the sides of the marzipan. Let it cool down for at least 30 minutes. 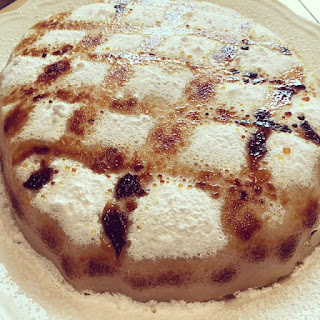 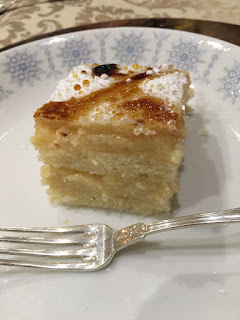 And this is the impressive Roman aqueduct in Segovia: 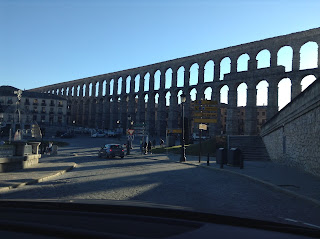