This dessert is called Tocinillo de Cielo, which literally means 'Little Bacon of Heaven' and it is heavenly indeed. It is one of the desserts invented by the Clarisa nuns with the many eggs they receive from brides,  as in Spain it is usual for brides to bring eggs - dozens of eggs-  to nuns on a wedding day so that they pray for good weather.

It is a very filling dessert, so this makes a little 'tocinillo' as you can see in the picture. The proportions of the ingredients are very straight forward so you can make a bigger tocinillo easily by doubling the amounts.

Preheat the oven at 180 degrees.
Mix the 125 ml of water with the 250 gr of sugar and let it boil until it reaches 105 degrees (around 15 minutes). Then let it cool down for 10 minutes.
Meanwhile prepare the caramel by putting the 70 g of sugar and the water in a pan under medium heat until it becomes golden without stirring it (swirling is fine). Pour the caramel on the mould where you are going to bake the tocinillio ( any cake mould or pyrex plate) and coat the bottom of the mould with it.
Beat very lightly the egg yokes and the egg and keep stirring while you pour slowly the sugar and water mixture into it. Pour the mixture into the caramelised mould. Then put the mould into a bigger (deep) oven tray. Put the egg shells on the bigger tray and fill it with boiling water until it comes to about three quarters of the hight of the tocinillo mould. Let it bake for half an hour and then let it cool down (in the fridge) overnight. 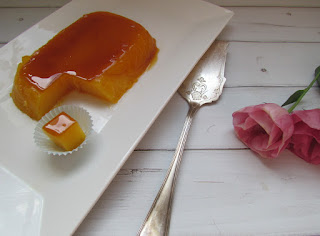