My birthday was yesterday and this was my cake. The charlotte russe dates back to the 18th century when a French female chef prepared a lady fingers and custard cake for the Russian Tsar Alexander I, whose sister was called Charlotte. You need:
- 30 lady fingers
- 150 ml water
-12 g of gelatin powder
- 2 tablespoons of strawberry jam
- 5 eggs
- half a litre of milk
- a teaspoon of corn flour
- a teaspoon of vanilla extract
- 4 tablespoons of sugar
- a handful of strawberries

You also need a (not too big) cooking ring.

Put the cooking ring on the dish where you are going to serve the charlotte.

Make a syrup by heating the strawberry jam and the 150 ml of water. When the jam is completely diluted let it cool down. Then start dipping the ladyfingers in the syrup and cover the sides of the ring as well as the base with them.

Heat the milk with two tablespoons of sugar and the gelatin powder (while you whisk it) until it is about to reach simmering point. Take a bit of the milk in a cup and mix it with the cornflour. Separate the egg yokes from the whites. Mix the egg yokes with the remaining two tablespoons of sugar. Then slowly mix the milk with the egg yokes and finally pour the cornflour mixture in.  Put the milk mixture back in the pan and heat it (slowly) while you whisk it until it becomes thick (it should coat the back of a spoon). Add the vanilla extract and then put it in the fridge for 15 minutes.

Before serving it get rid of the ring and cover with strawberries.

This cake is a bit fiddly for the children, but at the end of the day it is like making a slightly complicated version of a tiramisu. You can simplify it by using shop bought custard. I think my children prefer the tiramisu though. 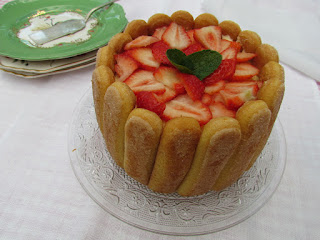