This is not for the children, it is for you. You know that time when you come home seriously late with friends after a drinking and dancing night desperate for food before you call it a day? This is what 'migas' are for - the most wonderful combination of carbohydrates and fat ( and if you have been dancing all those calories are OK for once). I promise you they can cure any hangover (I even had to give a speech the morning after my last night out and it went perfectly fine) They are so good that I made them again this weekend with the children.

Originally they were shepherd's food from the main plain in Spain, though some posh Spanish restaurants serve them as a starter now.

You need:
- 4 handfuls of cubed bread. Best is the white bit of baguettes that you can break down with your fingers, but cubed loaf bread is fine.
- 3 tablespoons of olive oil
- two garlic cloves
- half a red pepper ( or even better a dried Spanish pepper called 'nora')
- a pinch of paprika
- a quarter of a glass of water
- a quarter of a teaspoon of salt
- 60 g of cubed bacon or pancetta (they sell this already cubed in supermarkets)
- 60g of cubed chorizo (they also sell it already cubed in supermarkets)
- a handful of green grapes (cut in halves)

Dissolve the salt in the water and sprinkle it (not too much) over the cubed bread. Put it on a kitchen towel and press firmly so that you get rid of the excess moisture.  Heat the oil in a big frying pan. Fry the garlic cloves and peppers for 5 minutes (low heat). Discard the garlic and peppers. Fry (in the same oil) the bacon and chorizo for another 3-4 minutes, then add the paprika and finally the bread. Fry it all over medium heat for 8-ish minutes until the bread is golden. Take it off the heat and add the grapes (I know it is a bit weird to add grapes but it really works well)

My 11 and 13 years old sons though this was: easy, seriously good, and also very cool, though the latter is only because I told them this is a good dish to know for the  times when they will go clubbing when they are older. Probably not too good parenting skills - but it is never too early to learn about the important things in life... 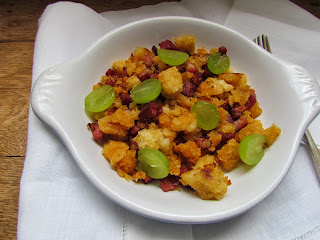