Don't be tempted to make this recipe: it takes forever, the kitchen becomes a mess and the kids get bored well before half-way though it. After many hours chopping, boiling, stirring, waiting, sterilising and testing the setting point it turns out that actually the children do not like the taste of marmalade. Honestly, if you are into it, any supermarket marmalade is just fine.

Since we (I!) did the whole thing  we (I!) decided to include this in the blog nevertheless.

We followed a recipe from Delia Smith which technically works well despite the comments above.

Squeeze the juice out of the oranges and lemon. Add it to the water.

Cut the orange peel (without the pith) in tiny pieces (...I know, it does take much longer than you think...) add them to the juice and water pan.

Put the pith and pips in a muslin cloth or bag. Put them also into the pan.

Bring it all to boil and then simmer for two (two!) hours.

After than let it cool down. Squeeze all the liquid out of the muslin bag. This is the pectin and you will need to squeeze for a while as there is more in there than you think ( ... and yes your hands will smell of orange for a good few hours...)

Increase the heat to high and let it boil for 15-ish minutes. This is when you can start testing the jam with cold saucers and any of the other methods that you can easily find  in the internet. If you have a candy thermometer boil it until it reaches jam temperature.

Then get rid of the scum with a spoon. You can add a bit of butter to help you (but it does not get rid of it all, so back to the spoon...).

Let it all settle for 20 minutes.

By this point you should have had time to sterilise the jars (in the dishwasher, oven or microwave).

Put the jam into the jars (this is actually more difficult that it seems unless you have a jam funnel) bringing it as close as possible to the top.

The good news is: there is no need to do this ever again in your whole life. 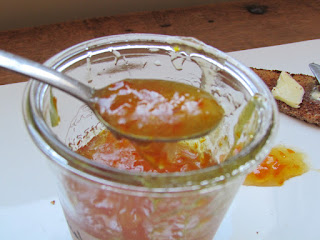