This is another good way to preserve tuna (see tuna 'in escabeche'). Children normally prefer it this way as it is less acidic than 'escabeche'. Mine eat it with salads, rice or baked potatoes.

Put the water in a pan with the salt and heat it until it starts to boil. Add the tuna in and cook it all under a very low heat (the lowest you can get) for 30 minutes. When the tuna is cold, run it under cold tap water for a few second, dry it with kitchen paper (getting rid of skin and bones) put it in sterilized jars, cover it with olive oil and close the jars. Let the jars rest during the night so that there are no bubbles. This should last for 3-4 months in the fridge.

The kids still refuse to touch the raw fish. They helped getting the cooked fish into the jars, but forgot to wash their hands before touching the jars first so we had to sterilize them twice. All you need to do to sterilize jars is to put them into a 180 degrees hot oven for 20 minutes, so not a big deal. 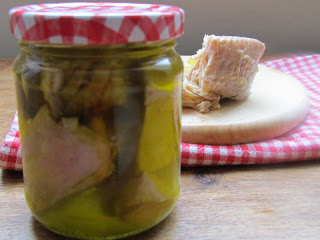