This can be served as a snack or a starter. Kids (and adults) simply love it. If you are feeling really indulgent get a baguette, put inside the fried squid and add a dollop of mayonnaise - this is the famous 'bocata de calamares' from Madrid. Seriously yummy.

You need:
- around 200 gr squid cut in rounds or sticks ( see picture). Fresh squid is obviously ideal, but frozen squid(already clean and cut)  also does the trick ( it has less flavour though)
- salt
- breadcrumbs
- olive oil
-1 lemon

Put a really generous amount of olive oil on a frying pan and heat it until it is almost smoking. Meanwhile add the salt to the squid and then dust the squid with the breadcrumbs. Put the squid in the pan, reduce the hit to medium and fry them quickly (around one minute or a minute and a half on each side - if you overcook them they will become tough and rubbery). Squeeze a bit of lemon on top and serve immediately .

Some people add garlic, parsley or chili, but this masks the squid flavour.

My children  refused touching the squid  ( I can see why). We tried dusting the squid inside a plastic bag and they thought that was a bit better - still they found the raw squid texture pretty revolting. None of this put them off from eating the whole lot once the squid were fried. 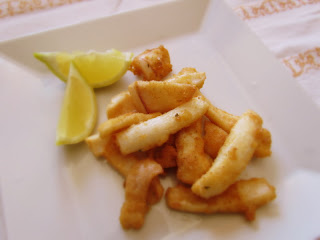