One of my sons has been studying the World Wars at school and as a result we have been looking into food they ate at that time. We found in a book (Baking Magic) a recipe for Anzac biscuits which were apparently  cooked for the soldiers in Australia and New Zealand during the First World War. They are a sort of a cross between a biscuit and a flapjack. The kids thought they were yummy - so not sure I managed to convey to them the feeling of 'post-War tough times' as I wanted to but at least we tried...
You need:
100 gr oats
150 gr plain flour
100 gr soft light brown sugar
115 gr butter
50 gr dessicated coconut
2 tbsp golden syrup
1 tbsp hot water
half tsp bicarbonate of soda
Preheat the oven to 190 degrees. Mix the oats, flour, sugar and coconut in a bowl. Heat the butter and golden syrup until the butter is melted. Separately, mix the hot water and bicarb and add it to the butter - this produces lots of foam. Put this foamy butter over the flour mixture and mix it all well. Make little balls of the mixture with your hands and put them over a baking tray (lined with baking paper) ensuring there is some space between them. Bake for 10 minutes. Let them rest on a wire rack for a few minutes after you take them out of the oven. Enjoy. 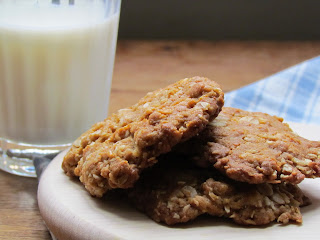